Ron, the banana bread guy, is a long established institution of Rurrenabaque.

Tourist guide books and many travel blogs write about him (the funniest one is this blog – scroll down to find the paragraph about Ron). We met Ron selling banana bread and brownies on the side of a street across from a French boulangerie. By his own account he started out as a jockey in Florida, later also on the Santa Anna race track in Los Angeles. As a teenager he had his first claim of fame as an extra in the original Flipper movie. He was originally casted to do all underwater scenes but ended up only with a small appearance as an extra. 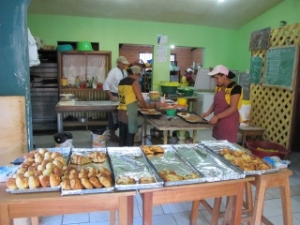 Somehow life guided him to Rurre a long time ago where he became a local celebrity with his banana bread. However, 6 years ago a French baker, Thierry, opened a bolangerie in Rurre and over the years established himself as the number one baker in town. Some call Ron crazy while others call Thierry grumpy: In any case we enjoyed the unexpected variety of pastries in the Bolivian jungle.