Our first trekking outing was quite adventurous: A what-was-supposed-to-be 3 days hike through the Canyon del Colca. 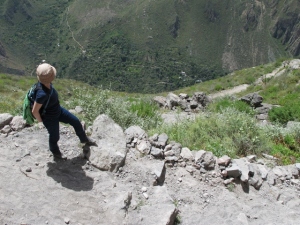 Canyon del Colca ranks 3rd in the list of the world deepest canyons and is twice as deep as the Grand Canyon in the US. It is also located about 1400m / 4200f higher as the Grand Canyon. The beauty of it is that there are actually villages and settlements in the canyon and along the walls which makes it more attractive for extended hikes.

Even though the upper part of the Colca canyon is more a valley with rolling hills, the lower 1200m / 3600f of elevation are as challenging as the Grand Canyon.  Nadine and I realized this on our 4 hours decline into the canyon along its south wall on our first day! 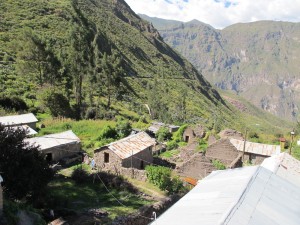 We spend the second day climbing up and down the north wall from village to village and joining other hikers. At the end of that day we arrived as a Korean-South African-British-German-French team at the so called OASIS, the base for the ascent out. Dinner at candle light (very little electricity is available in the valley) was still romantic but during the night food poisoning kicked in. I woke up sick like a dog! Fortunately we had carried our antibiotics with us but there was no way I could climb out the very same day.

There is a cash economy in the canyon and we started realizing that we were short on funds with the next ATM machine a day distance away. So we did the calculation and came up with a plan: We could hire one mule for the next day to carry me and our backpack out of the canyon while Nadine  would wait for the early afternoon clouds to move in to walk up the trail. We were told that there was a 6 PM bus to Arequipa leaving at the top of the canyon and the challenge was for Nadine to make it back up on time. All the expenses accounted for we would arrive Arequipa with 5 Soles / $2 left in our pocket. 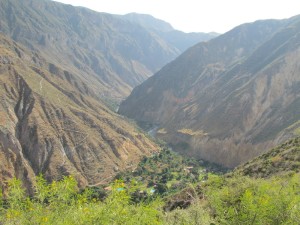 The next day started good: My stomach cramps were gone. I could eat some light food to keep me on the mule which showed up on time. While I was waiting for the mule Nadine had started the climb. Even though I was happy to have the mule carrying me up the wall it was pretty scary at times at the edge of the small and slippery trail. Also, we didn’t pass Nadine for a long time and I was  worried that she had lost the right trail. It turned out that she was almost running up the 1100m / 3300f elevation change to make the bus. She completed what the locals consider a 3 hours hike in 2 hours, just 30 minutes short of the mules!

It turned out that the only bus leaving that day was at 10PM and we had to wait another 5 hours. It started to get cold, we were exhausted and we had no cash to pay for a warm dinner and place to wait. Relying on the kindness of strangers we finally found a local tour guide who knew the only hotel in the village which could accept credit cards and was serving dinner.

After a 6 1/2 hours bus ride through the mountains we arrived in civilization with ATM machines at every corner at 4:30 AM in the morning